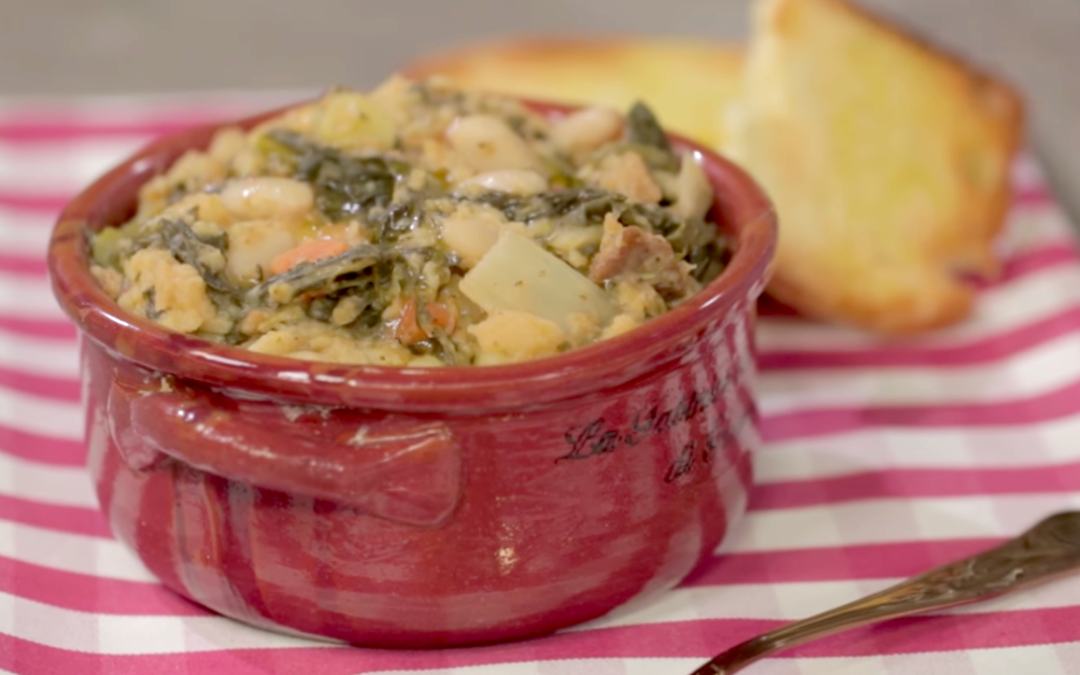 Nowadays, this recipe is the symbol of family traditions and of the local customs, extremely popular during the winter months in Italy. Ribollita is a a hot and tasty first course: a soup made with vegetables, stale bread and cannellini beans. Ribollita is literally translated into “re-boiled”, as a matter of fact this soup is cooked several times.

A little bit of history

The origins of this dish date back to the Middle Ages when the nobles used to consume their dishes with bread. Once lunch was over, the leftover bread was given to the servants, who, to feed themselves, combined it with vegetables, obtaining a tasty soup after boiling it. After that, according to the peasant tradition, ribollita was usually prepared on Friday with the leftovers from the day before.

Like any traditional dish, there are a great deal of variations, depending on family’s version and on the region. The vegetables to be combined with black cabbage and savoy cabbage can be different: zucchini, peas and potatoes are the most used. Moreover, some use also the rustic bread instead of the stale one.

Ingredients for the soup

To prepare our ribollita, start by cooking the cannellini beans: soak them in a bowl full of water at least 12 hours (ideally 24 hours). After this time, heat the olive oil in a pot with the garlic cloves and the rosemary sprig.  Once the beans have soaked, drain them and add them in the pot with water until it covers the beans. Let it cook for 1 hour on medium heat with the lid on. When cooked, add pepper and salt, remove the rosemary sprig as well as remove a part of the beans, placing in a separate bowl because these latter will be added whole at the end. Blend everything in order to obtain a broth that you will need to cook the soup. Next, make the soffritto. Chop the onion and the celery finely, peel the carrot and cut it into small cubes. In a pan, heat 25 g of olive oil and fry the chopped onion, celery and carrots on the middle flame. Then, add the peeled and diced potato. While the vegetables are cooking, pour the tomatoes into a bowl, mash them with a fork and finally add them to the vegetables in the pan. While cooking continues, cut the savoy cabbage into julienne, cut the chard coarsely and lastly cut the black cabbage leaves roughly . At this point, add the chopped vegetables to the soup (the savoy cabbage, the chard and the black cabbage). Now pour the bean broth, mix, cover with the lid and bring it to the boil. When the soup boils, remove the lid and cook for another 45 minutes, stirring occasionally. When the soup is ready, season it with salt and pepper, adding the whole beans that you have kept aside, stir and turn off the heat. Cut the stale bread, put them on the bottom of a bowl and pour with a little bit of soup, then put another layer of bread and pour with more soup, continuing alternating the layers until you finish the ingredients. Leave to cool to room temperature and then put it in the fridge for at least 2 hours. After this time, the bread will have absorbed the soup, pour it into a pan, bring it to the boil, flavor it with chilli pepper and thyme leaves. Finally, our ribollita is ready to be enjoyed!