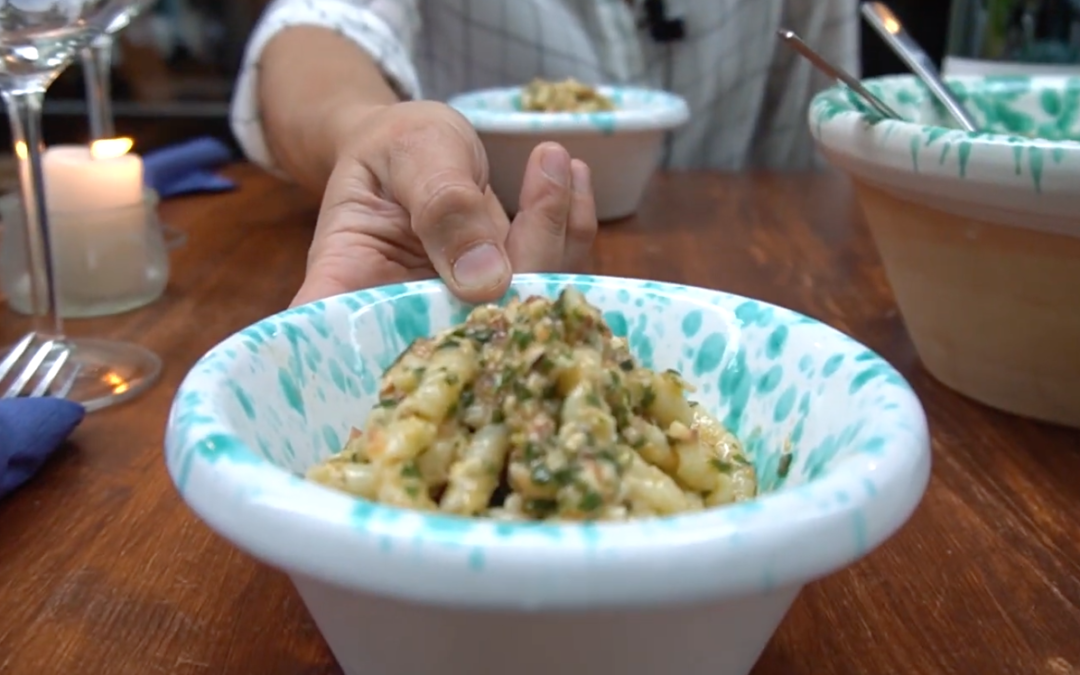 The preparation of Sicilian pesto is based on the typical products of Sicily. There is no real basic recipe, but there are canonical ingredients that must be used to obtain a result very close to tradition. Basil, tomatoes, almonds and a choice of cheese (Parmesan, pecorino or ricotta). As with all regional recipes, there are many variations.

Trapanese pesto is a traditional Sicilian sauce. It is original from Trapani province. This sauce is usually used to season the first course as pasta. This pesto is prepared with basil, tomatoes, almonds, pecorino cheese, and red garlic, all pounded with mortar. Its special features is that it is a raw sauce. The pasta cu l’agghia (garlic in Sicilian dialect) is a typical dish of Trapani cuisine. Busiati pasta with Trapanese pesto is one of the traditional Sicilian food products recognized by the Ministry of Agriculture, Food and Forestry. As well as being used as a seasoning for pasta, Trapanese pesto is also found in another traditional dish, babbaluci cu l’agghia, which are small land snails boiled and then dressed with this cold sauce.

This is an ancient recipe. In the past, Genoese ships stopped at the port of Trapani, bringing the tradition of the Ligurian agliata, made with garlic and walnuts. From this recipe, what we now know as Trapanese pesto was developed by Trapani sailors using the products of their land, tomatoes, and almonds. There are two different types of pasta that are traditionally cooked with Trapanese pesto, the most known is busiate a similar type of fresh macaroni pasta and the other one is gnoccoli.

The traditional recipe of Trapanese pesto

To prepare Trapanese pesto we have to use peeled almonds. Let’s start blanching them for a few minutes in boiling water, then drain them, allow them to dry, and once cooled peel them one by one.

Put on the flame a pot full of water, and wash the tomatoes under running water. When the water starts to boil, blanch the tomatoes for 2 -3 minutes. Drain the tomatoes with a slotted spoon and leave to cool. Once cooled, peel the tomatoes and place them in a blender together with the basil, peeled almonds, and garlic and blend for a couple of minutes.

When you have obtained a homogeneous mixture, add the pecorino cheese and transfer the salcìsa to a bowl. Add salt, pepper, and a drizzle of oil and mix everything. Here you have your Trapanese pesto that you can use to season your favourite type of pasta.