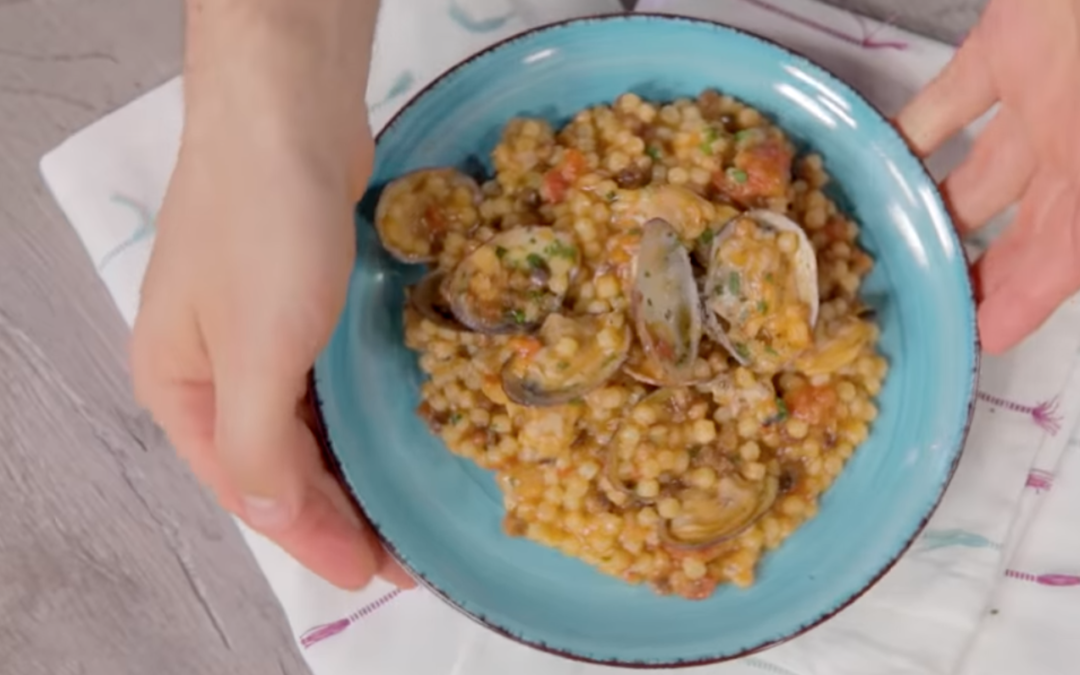 Fregula, an ancient recipe for a unique first course

They say this first course had been created over 1000 years ago, in the magical island of Sardinia, who is the motherland of lots of sensational dishes. This tasty but simple recipe has a format made of many, irregular “crumbs” of pasta. In fact, it owes its name from the Latin ferculum, that means “crumb“. The Fregula (or Fregola, but actually the correct way to call it is the first one) is created by kneading and mixing together for a long time semolina and water, then toasted in the oven. Throughout Sardinia it is common to season Fregula with sauces, red or white, based on fish, but you can also choose over lots of different ingredients to mix up with Fregula: from the precious ones such as bottarga, or to stay classic by using some fresh vegetables.
One of the most known ways to cook it, is with the “zafferano” (saffron), a very special spice, that is a Sardinian excellence which will give it not only a delicious aroma but also a splendid yellow color.
Sometimes people get confused with the resemblance of this meal with “cous-cous”, but don’t misunderstood: Sardinian Fregula is cooked by boiling and not steamed.

Italian wines to pair with Fregula

If you choose to cook fregola with seafood, the best choice you could take is to accompany it with a well-known and a very fresh wine, such as Vermentino of Sardinia. This one matches perfectly with fregula, and enhances the delicate flavours of the sea in this special dish. This wine is a still, white one; made in Sardinia , it has a bright yellow colour with greenish tones, typical of vermentino, with a delicious fruity and floral aroma. In case you prefer cook fregola with Saffron, you can never go wrong by putting on the table a bottle of Gewurztraminer, an indigenous white wine produced in Alto Adige and more specifically in Tramin (Termeno), a small village in the province of Bolzano in the northern part of Italy.

HOW TO PREPARE FREGULA WITH SAFFRON AND ARSELLE AT HOME

INGREDIENTS FOR THE FREGULA:

INGREDIENTS FOR THE SAUCE:

Dissolve the saffron in the lukewarm water and add a pinch of salt; in a wide-bottomed bowl, throw some water and a tablespoon of semolina. Work with your fingertips, turning your hand always in the same direction, so as to form lumps of dough.
Add spoonfuls of semolina and water.
Create balls of the desired size and move them to a baking tray, covered with baking paper, to dry, and proceed to the end of the ingredients. Drying will take between 1 and 3 days depending on the climate. The fregola must be completely dry to be cooked. It is also advisable to toast it in the oven at 180° for at least 15 minutes. After that, prepare the clams; discard the broken ones and put the others closed in a colander, in turn put in a larger container, completely immersed in cold, salted water, for about an hour, so that they pull out any sand. In a large frying pan, heat the oil with two crushed cloves of garlic and leave to brown for a few minutes.
Drain the clams and cook over a high heat, allowing them to open. Brown a clove of garlic with oil and parsley. Add the tomato and leave to gain flavour for a few minutes. Add the fish stock. Now clean the clams, remove them from their shells and set them aside.
Some can be kept in their shells as a final decoration. Then filter the cooking water from the clams.
Add the fregula to the sauce and adjust the salt. As the fregula cooks, add more stock if necessary and finish cooking the pasta, adding the clams in the last minutes of cooking and some fresh parsley.

Serve hot with a drizzle of raw oil and a grind of pepper.

Purge the clams, clean the mussels, put them all in a pan, cover and put on high heat for a few minutes to make them open, then filter the sauce obtained with a very fine mesh strainer.
Remove the shells from the molluscs and clean the shrimps too. Remove skin and entrails from the squid, then rinse well and cut into thin rings. In a pan, brown the garlic with the oil and add the squid, shrimps and then deglaze with the wine.
Add the tomato sauce and the shellfish sauce and cook for about 15 minutes adjusting with salt and pepper, then add the shellfish and turn off the heat. Filter everything so as to separate the fish from the sauce.
In a large pot, heat a little oil and add the fregola. Toast for some minutes and then add the sauce. Proceed with the cooking such as it was a risotto. When the fregola is almost cooked, add the seafood and finish cooking. Add a drizzle of raw oil, mix and turn off the heat. Leave to rest for a couple of minutes in the pot.

Serve by completing with the shellfish in their shell and a handful of finely chopped parsley.