Cannoli, the sweetest pride for every Sicilian 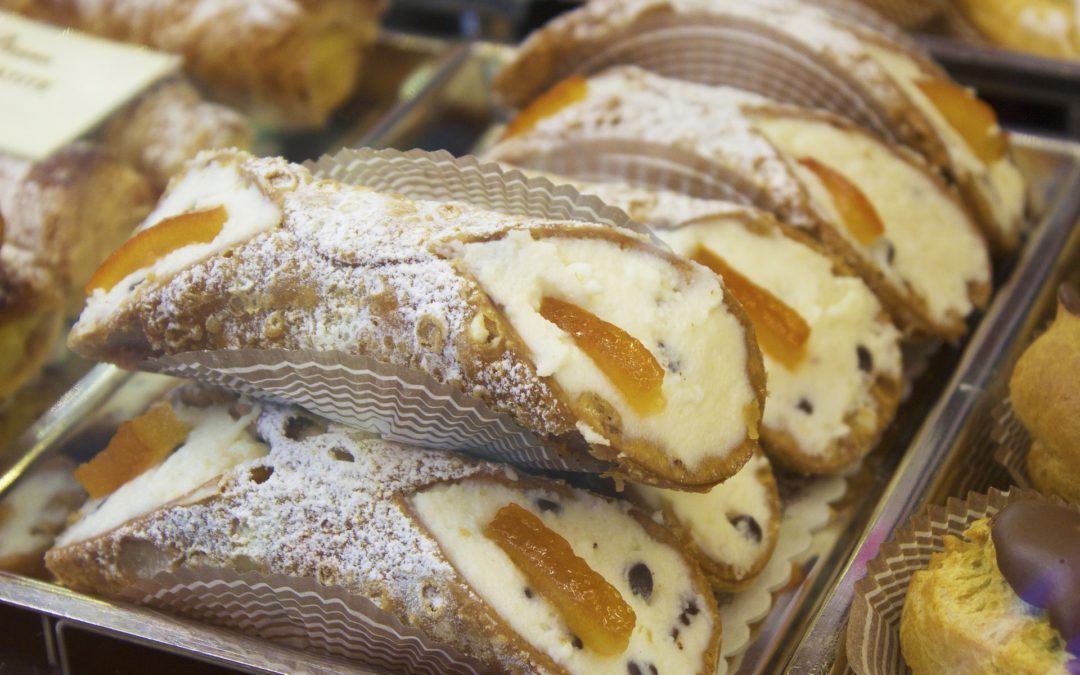 Sweeten your day with some Cannoli: one of the many Sicilian culinary masterpieces

They are recognized worldwide and they are one of the most iconic pastries of Sicilian cuisine, as well as the entire Italian cuisine. Long ago, Cannoli were made only during Carnival time, but nowadays, their popularity has spread so much that they are regarded as the perfect representation of the Italian dessert. Cannoli basically consist of a tube-shaped crunchy waffle, filled with sheep ricotta. Following the traditional recipe, candied fruits and chocolate chips are added and everything is covered with powdered sugar. As with almost every recipe, many varieties are clearly possible: cannoli with pistachio cream, chocolate, chantilly cream, almonds, hazelnuts and many other ways to customize both the filling and the waffle.

A blurry past with an important bond with the Arabic dominance

The history behind Cannoli is not clear – their origin is a mixture between reality and myth, but perhaps it is exactly what makes their history as charming as mysterious. It is said that Cannoli were first born in Caltanissetta. According to the legend, they could have been created either by nuns or by women from the several harems of the city. Probably, the women from the harem of Kalt El Nissa (the modern Caltanissetta) were the very first to create a recipe that was very similar to cannoli as we know today. They allegedly were trying to make one of the many desserts that they used to make in their free time as a sort of gift for the Sultan and they came up with this particular tube-shaped dessert. Yet, others suggest that cannoli are a recipe that comes from the nuns of a convent in Caltanissetta. The nuns made up this Sicilian specialty in the attempt to make a witty and special dessert to mark the Carnival. Their recipe consisted of ricotta and sugar filling with some chocolate chips and almonds. Whether cannoli’s origin is linked to the first theory or the latter, everyone certainly agrees that they wouldn’t exist nowadays without Arabic influence in Sicily. As we know, Arabs played a huge role in shaping the Sicilian identity and tradition, and that involves the culinary tradition as well.

And what about the name? The name cannoli could be translated as “little tubes” and it refers to rivers’ canes. They were used to roll up the waffle and give it their distinctive shape.

Let’s start with the waffle. Pour the flour, the cocoa, the sugar, the salt, the lard, an egg, Marsala and vinegar in a bowl. Knead with your hands for about 10 minutes, until you get a smooth dough. Cover with cling film and let it rest for about 1 hour in the fridge. Later, take it out and let it rest again for 30 minutes. Then, knead well the dough with the pasta making machine. Keep on until you get a very well dilated dough. Cut the dough, in order to obtain 10x10cm squares. In the middle of each square, put a steel cylinder from one corner to the other. Wrap the dough on the cylinder and you’ll get the cannoli shape. Remember to leave the cannoli dough rest for a bit before cooking them! Then, heat the oil and fry the cannoli one at a time. Drain them and put them on a paper towel. Let them cool and pull out the cylinder. Let’s move on to the filling. Pour the ricotta, sugar, chocolate chips into a bowl and mix all. Transfer the compound in a sac-à poche and fill the cannoli. Eventually, garnish with chopped pistachios, candied orange and cherries and cover the cannoli with powdered sugar. A tip – wait to fill the cannoli until it’s time to eat them, they’ll taste just perfect.

What would your choice be? Classic, chocolate, hazelnut, pistachio and much more ways are possible. Pick your favorite cannoli type and enjoy a small bite of Sicily!