Porchetta: an Italian mouthwatering deliciousness for the best sandwich 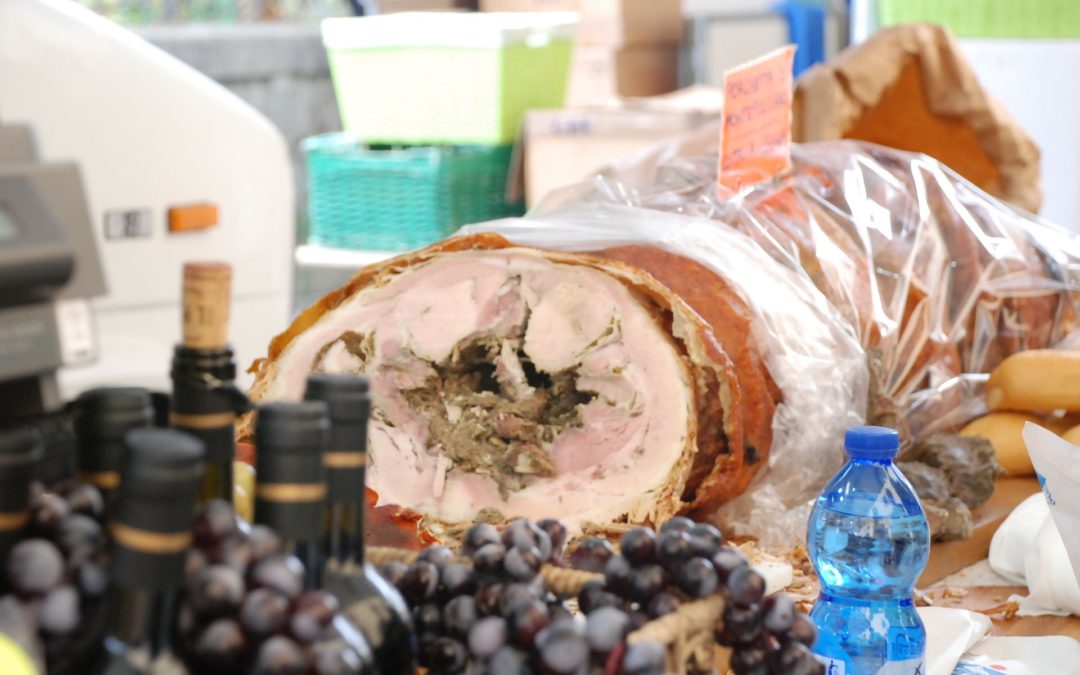 One simple ingredient for a taste sensation: Porchetta

Porchetta, best known for its incredible mixture of taste, basically consists of boneless roast pork. Even if its origins are still a mystery, tradition usually links Porchetta with the central Italy, especially with Lazio and Umbria regions.

Thanks to its versatility, it can be consumed in a wide variety of ways (as an appetizer or main meal), however, it is famous and appreciated worldwide in the so-called Italian “panino onto”, which consists of a filled sandwich with porchetta, grilled vegetables such as peppers, zucchini, onion topped with ketchup, mayonnaise or barbecue sauce.

Origins of porchetta and its global fame

Despite the uncertain origins, both cities Ariccia (Lazio) and Norcia (Umbria) claim the paternity for the authentic recipe, which dates back to the Romans period or even earlier, to the Etruscan period.
Over the years, Porchetta has become the undisputed protagonist of local and music festivals, for this reason, it represents one of the street-food dish par excellence, sold by pitchmen in their typical white-painted van.

Porchetta, as part of the list “Prodotti Agroalimentari Traditionali”, the traditional Agri-food Products, can boast its unique taste all over the world.
According to the New York Times, porchetta has even been awarded as one of the five most tasty street-food in the world and in Canada, several challenges are set up to celebrate it.

Depending on the type of spices used to aromatize Porchetta, its savour can be extremely different. The spices also discloses the region where it comes from, because, traditionally in Tuscany porchetta is flavoured with rosemary, whereas, in Lazio, Umbria, Marche and Romagna regions, it gets substituted with wild fennel, which gives it a tangy but flavourful taste.

Let’s discover the secret behind this incredible taste

In order to prepare porchetta, the main ingredient is of course a female pig (hence the name porchetta) weighing about a quintal; It can be cooked whole or just the logs (i.e. the part between the third dorsal vertebra and the last lumbar vertebra of the pig). First of all, it must be bled and immersed in a tank of boiling water to proceed with depilation. Afterwards, it is stuffed with several flavours and cooked for between 6 and 8 hours at a temperature of around 200 degrees.

What is truly special in this recipe is that every hour porchetta needs to be taken out of the oven and coated with the “lard” pouring from the meat itself to give it its typical golden, crispy crust.

Not only a dish, but also a global record

In 2013, porchetta coming from Monte San Savino (Tuscany) won the Guinness World Records as the biggest porchetta in the world, it was 44,93 metres long.

Where you can taste it

At this point, you should be drool enough, so, let’s go deep in the Berlin restaurants offering Porchetta:
Prometeo is always the best choice in terms of real Italian pizza, so you can’t be wrong if you want to taste porchetta together with the best pizza and focaccia.

If instead you prefer tasting porchetta as a main dish, don’t worry, we have the most suitable option for you: MedEATrranean trip offers different fresh menu every week with seasonal Italian ingredients

Eventually, if you are more traditional and would like to discover the famous “panino onto”, don’t hesitate to come by Lost My Love to Italy, where you can eat porchetta sandwich with juicy cocktails and Aperol Spritz