Watch out for Nepitelle’s sweet heart 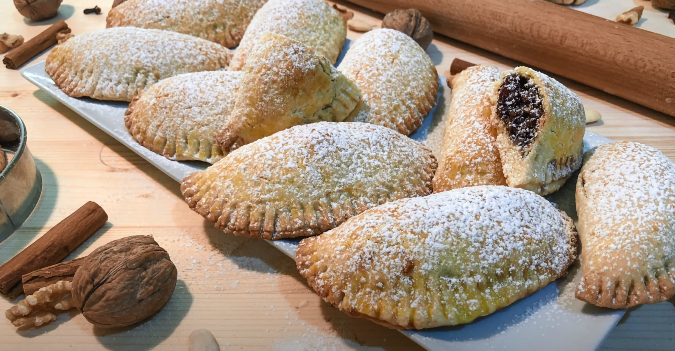 Nepitelle are sweets typical of the Calabria region, especially of the cities Crotone and Catanzaro; despite being traditionally an Easter dessert, Nepitelle are rather popular also at Christmas, but nowadays their consumption is common all year long. Their name comes from the Latin term “nepitedum”, which literally means “eyelid”: it is a clear reference to the characteristic half-moon shape of these sweets, which hides a rich filling made of raisins, almonds, walnuts, cinnamon, nutmeg, honey, wine and many more ingredients according to the chef’s preference.

Despite the Latin name, the first recipe for the Nepitelle comes from the Arabic cuisine. Their diffusion in the Calabria region dates back to many centuries ago and their history is so long that in 1895 the name of this dish was mentioned in two vocabularies from the regional dialect to Italian.

The very term for Nepitelle is a small language treasure of its own, since even in the region of origin of these sweets it is possible to bump into many different names: nepite, nepitejie, crestine dolci, pizze cu niepita and nepiteddhi are only a few of the numerous variants.

Included in the list of the Prodotti Agroalimentari Tradizionali, the Traditional Agri-food Products, Nepitelle’s tastiness never fails to conquer everyone.

The biggest strength of Nepitelle is the filling, especially because there is no definitive version; nonetheless, you can rest assured that, no matter what ingredients you choose among the many possibilities, the result will be delicious! They can contain nuts or almonds, mustard or honey, wine or liquor, dried figgs or raisins, jam or dark chocolate and, of course, spices at will. All of this inside a very simple dough made of eggs, flour, butter and sugar that makes the filling stand out in its full glory.

In order to prepare the dough, place the flour on a board and add the eggs, sugar, butter at room temperature, yeast and a pinch of salt. Start kneading with your hands to form a smooth and compact texture, then let it rest for 30 minutes. In the meanwhile, start working on the filling by grinding the almonds, the walnuts and the figs, then add the raisins, cinnamon, liquor, nutmeg, orange or lemon’s zest, the cocoa powder and the dark chocolate. Mix all the ingredients and finally add honey, previously melted in a pot, and cooked wine or sour cherry jam. When the filling is well blended, let it rest for 30 minutes under a clean and dry cloth.

Take the dough and roll it out with the rolling pin until it reaches the thickness of about 3 mm and, using a glass, obtain disks of dough of about 15 cm of diameter. Place at the centre of each disk some filling and fold it in order to get a half-moon shape: to close it more easily, you can spread some egg white on the edges. Cook the Nepitelle in static oven at 180°C for 20 minutes and serve dusted with powdered sugar.