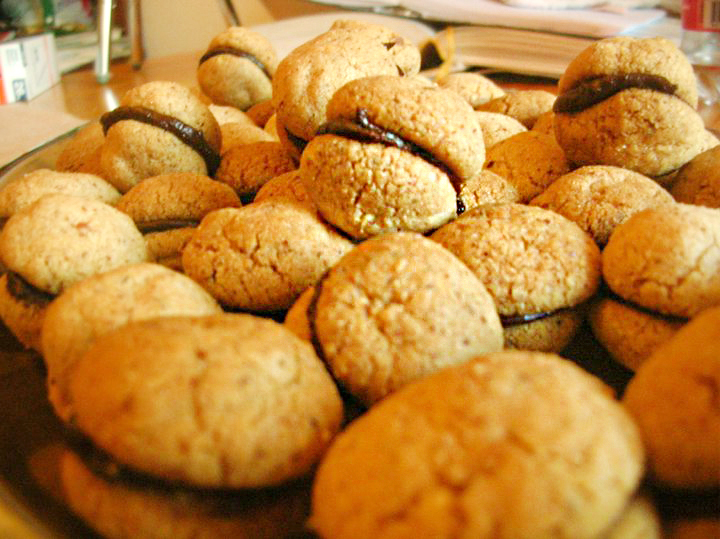 A typical biscuit of the Piedmont patisserie

The history of the most romantic biscuit of the world! Baci di Dama is a famous Italian homemade pastries that has its origin in Piedmont. The history of Baci di Dama start in ‘800 and since then, delights gourmet palates. This name is due to its shape: this speciality is composed by two biscuits that seem to form a girl’s lips/kiss, merged by dark chocolate.

A delight born three centuries ago

The stories and legends related to the Baci di Dama recipe, are close to the Savoia’s royal family. According to the legend, in 1852, the King Vittorio Emanuele II asks to his chefs to create a new and different dessert. The King was stunned by the result and since then Baci di Dama were served in all the royal tables in Italy and in Europe.

The real story says that Baci di Dama are original from Tortona. Initially the recipe requires Piedmontese hazelnuts (less expensive and easier to find than almonds). This recipe was edited in 1819 by Stefano Varcesi who replaced hazelnuts with almonds, creating the Baci Dorati. This variation won the gold medal in 1906 at the international exhibition in Milan.

Baci di Dama are really famous and they have a lot of variants, as for example as we said before Baci Dorati, but also Baci di Alassio are another variation with an add of cocoa and honey in the dough of the biscuits. They were created by Pasquale Bazola in 1919.

Start preparing the shortcrust: put in a bowl the flour (that have to be sieved) and the sugar. Mix and then add the hazelnuts’s flour and the butter. Knead the dough with hands, give it a loaf shape and put in the fridge for 1 hour.

When the time is up, roll out the dough with a rolling pin and divide it in order to create little balls. Put the balls in a baking tray (covered with baking paper) and let them rest for 20 minutes in the freezer.

After 20 minutes put the balls in the oven (preheated a 160°) and cook for 10-12 minutes. Meanwhile melt the dark chocolate.

When your balls are ready, let them cool down and then put the chocolate between two biscuits.