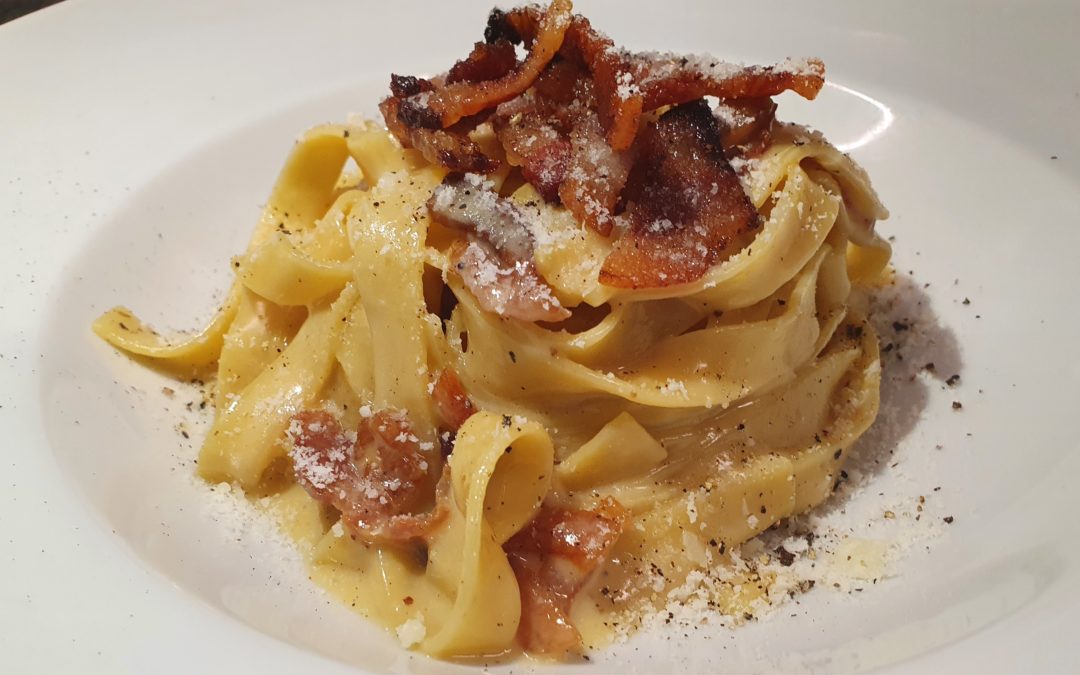 Carbonara is one of Italian’s best known dishes! If you travel to Italy and specifically to Rome, you MUST eat this delicacy.

Origins
There are many stories behind Carbonara, but the first mention about combining pasta and eggs can be found in “Il cuoco galante” a recipes book by Vincenzo Corrado. Only in 1881 Francesco Palma mentioned a more specific recipe called Maccheroni con cacio e uova (pasta with cheese and egg), published in “Il principe dei cuochi”.

The story behind the name

Where does the name Carbonara come from? Carbonara actually refers to two legends of the tradition: 1. the name is Carbonara because of the people working in the Appennini that recollected wood to make coal (carbone=coal); 2. A woman, who in 1800 used to host the reunions of ‘carboneria’ (a secret revolutionary Italian society) and often cooked them a good dish of pasta and from “carboneria” we got the name Carbonara.

Popularity
Carbonara became popular in 1944, the story goes by telling us that the American soldiers fighting in the Second World War on the Reinhard line between Lazio, Molise and Campania, had the chance to try the typical pasta mentioned before (pasta with cheese and egg). It was natural then to add the guanciale, typical from the area in which they were fighting and eventually smoked bacon. The final recipe of Carbonara, pasta with eggs, guanciale and pecorino, became popular among soldiers because the dish reminded them of their homeland and only afterwards it was ‘adopted’ by Italians.

Recipe
You should really enjoy a wonderful Carbonara in Rome, but if you can’t travel, you can cook it at home!
Here is the simple recipe and don’t forget NOT to add any other ingredient, to follow the Italian tradition properly. For 4 people you will need:

In a non-stick frying pan put the pieces of guanciale (without oil or butter!) and brown them for about 15 minutes over medium heat. Pour the egg yolks into a bowl, add most of the Pecorino and keep the remaining part to garnish the pasta. Add some black pepper and mix everything together. Add a tablespoon of cooking water from the pasta pot to dilute the mixture and stir. Drain the pasta “al dente” directly into the pan with the guanciale and toss briefly. Remove from the heat and pour the egg and Pecorino mixture into the pan. Stir quickly to combine. Serve the spaghetti alla carbonara immediately, seasoning with the leftover Pecorino and black pepper to taste.
Buon appetito!