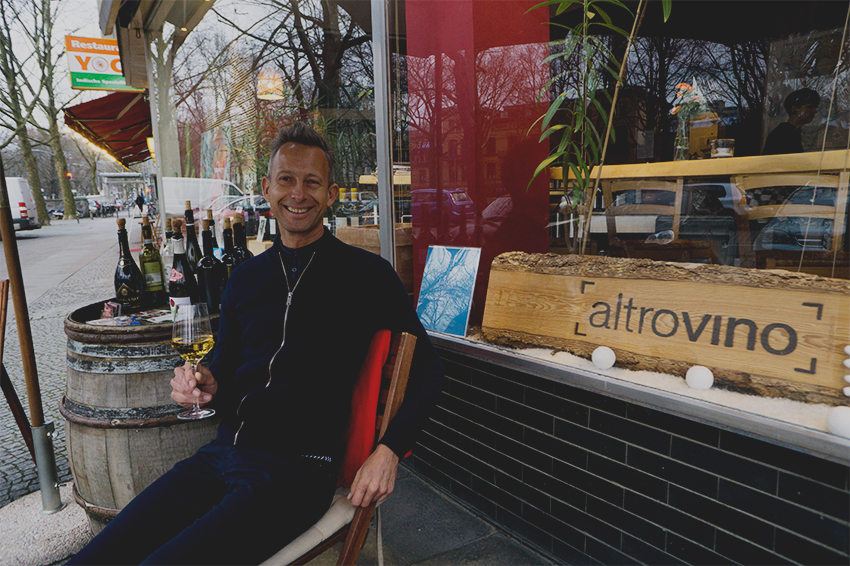 In Berlin, in one of the smartest streets of Kreuzberg, it is located a wine shop called Altrovino, which sells only Italian wines, which are difficult to find elsewhere, even in Italy….

The owner is German and his name is Stephan Pelzl. He is about 40 and he has transformed a flower shop in a cozy bar, where you can buy wine bottles or you can taste them directly, possibly combining wine glasses with cutting boards composed of cheeses and cured meats . Stephan Pelzl is a German, who loves Italy, so deeply that he has decided to protect and to spread the culture more than some of our compatriots. His love towards Italy began when he was in Erasmus in Bologna during the university. « Italy has a unique enogastronomic culture, that is appreciated in all the world. When I decided to open the bar in 2014, after having worked in the wine sector for many years, I set a goal, which was not simple to realize: to offer to Berliner the authenticity of the Italian wine, that you can find also in Italy, namely exclusively produced by native and traditional Italian wine grapes and imported directly by producers».

Read this article in Italian here. The wines of Altrovino are not elsewhere

«I started in 2014 with about twenty tags, now are more than one hundred. From Pignoletto, Manzoni Bianco, Cilegiolo to wines from Southern Italy: Aglianico, Piedirosso, Gaglioppo, Grillo di Sicilia etc. including sparkling wines, which are produced with the classical method ( fermented in the bottle) and semi-sparkling wines produced with yeasts, using the ancient method. In September 2017, our Lambrusco di Sorbara, which is dry, has appeared on the German daily magazine Tagesspiegel in the section: wine of the month. Stephan said it was a surprising satisfaction, because that type of wine was not so common in Berlin. He knows Italy very well because he has visited our country from the north to the south for 25 years. Concerning the process of selection, Stephan goes personally to exhibitions, such as the Vinitaly in Verona, but also to little presentations such as VinNatur near Vicenza, Vini Veri in Cerea, Vitigno Italia in Naples and Autoctona in Bolzano. These exhibitions help him for a first skimming. The important thing is to verify the status of vineyards and productive processes, which are realized. «Behind the production of wine, there are families, people, and it is beautiful to have a contact with them. To know them, is a richness, because you can know how the production works. It is an endless research. « I love wines, which have a strong peculiarity». When Stephan is unable to travel, the wine reaches him. After careful researches, Stephan asks to interesting wineries samples of wine, which are sent to him in Germany and he tastes them with friends and colleagues». When a type of wine persuades him, he buys it. You can buy or try all the bottles on-site, possibly combining a wine glass with a cutting board composed of cheeses and ready-sliced meats, which have a high Italian quality. The bar is cozy and the place is extraordinary both from an historical point of view (the building was destroyed in 1945 from Russian tanks, then it was assigned as accommodation to the workers of the West Germany in the 60’s and in the 90’s was a little flower shop) and for the position. Grimmstraße 17 is near to the canal of Kreuzberg. When the weather is good, the best suggestion is to buy a bottle of wine, to ask for ice and to sip it along the canal of Maybachufer or on the Admiralbrücke, or to enjoy it on the balcony of the bar. The balcony has 20 seats and different beach umbrellas. Here you can sip a glass of wine and enjoy the unique and suggestive atmosphere of Kreuzberg, one of the most beautiful districts of Berlin.

Not only wine, but also food, Select and events every month

Once a month, Altrovino proposes a tasting of 8-10 themed wines , or regional or special wines with the addition of a buffet of selected cheeses, cured meats and Italian toasts. The cutting board is regular on the menu of the bar. Another peculiarity of Altrovino is the Select, a traditional venetian aperitif, which was born in 1920. Stephan is the only importer in Germany. For others requests, there are also grappa, the tonic liquor of Etna and different handmade German beers such as the original Berliner Weisse, which is not filtered, but is prepared with the addition of lactic bacteria and particular yeasts, traditional method, that is in disuse for 50 years. For Stephan it should be all original and done carefully. «After all, when we speak about food and wine, that’s not how you do it, in Italy?».

Opening times: Tuesday-Saturday from 2 PM to 10 PM and later