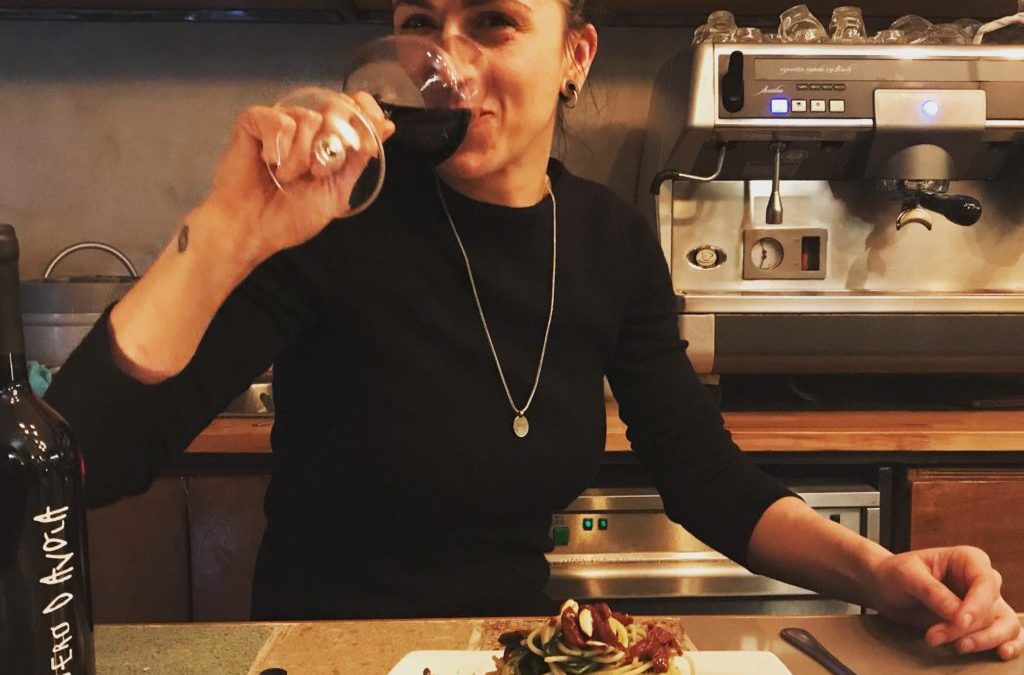 «Sicilian food of happiness». This is the slogan at Orlando, the Italian restaurant in Prenzlauer Berg that brings to Berlin the very best of Sicilian cuisine thanks to Giulia.

At Orlando you find fresh and homemade pasta everyday. Caponata, a sweet and sour dish made of fried aubergines, capers, olives, raisins and celery, and arancine, fried rice ball, are served in lemmi, typical Sicilian bowl. The cannoli are freshly filled with traditional goat ricotta. Also the wine remembers Mediterranean flavors, with the perfumed Nero D’Avola and Catarratto. These are just a few of the delicious dishes that Giulia served at Orlando, making Berlin people discover the authentic Sicilian tradition.

Read this article in Italian or in German.

« I’m a gispy wandering around in search of the beauty. », said Giulia about herself. Arrived in Berlin from Palermo, telling her story made of food, culture and passion. In this story there is also another character, Simone, the chef. His father is from Sicily, his mother from Campania, but he grown up in Piedmont. As Giulia explains, Simone «knows and combines three different traditions, creating a unique and surprising mix. In the kitchen we work in perfect harmony: he understands my ideas and creates delicious dishes which combines tradition and innovation and his personal touch. Orlando is exactly this, a combination of ideas, projects and passion. I would like to share it with Berlin people, thus at Orlando I offer dishes that can satisfy the most different tastes and exigencies: meat- or fish-lovers, vegetarian or vegan, people with celiac disease. Our lunch menu offers a main, a salad, a coffee and a dessert for just 8€. But there also a lot of fans for our daily aperitivo: 5€ for a drink and a delicious buffet. Our most appreciates recipes? The signature dish is for sure our caponata, then there are arancine, cannoli siciliani, annelletti al forno, which is a baked pasta with tomato or ragout, and “pane cunzato”, homemade bread with fresh cheese, tomatoes and anchovies. Our customers really love also our selection of Sicilian wines and liquors, that make them discovery the perfumes and traditional of my region». During the weekend, it is possible to rent Orland for private events, workshop or supper club.

The idea of Orlando was born after a long journey across Sicily. I wanted to find out different culinary realities. I met lots of people whom nowadays I consider friends. Orlando suppliers are mainly young entrepreneurs. The wine, for instance, comes from Petrosino and is produced by Terre del Sole Zerilli. Liquors are Sclafani, a little place nearby Palermo. Our coffee comes from Catania and our olive oil from a little village near Messina. We toured Sicily far and wide, treasuring its culinary differences. I love to work together with people whom are similar to me. Person whom love their country and would like to improve it. This is our strenght: our suppliers are person I trust in, they work with care and dedication.

Orlando Furioso and the “sicilitudine”

“You must know Sicilians are affected by an incurable disease: the sicilitudine, that is the bond to their country and its heritage. Sicily is rich because of the invasions experienced in the past: We use chickpea flour, arrived from Morocco, and Turkish cous cous. They both came to Sicily while the arabic dominion in the Middle East and North Africa. Our kitchen is really wide”.
“The name Orlando has been chosen because of my bond to my hometown, Palermo. The history of the Orlando Furioso is still narrated nowadays in the Teatro dei Pupi, part of the UNESCO world heritage site. Sicilian story tellers have described for centuries the every-day life in Sicily, through the brave achievements of Carlo Magno defenders. The restaurant logo,too, revokes the knightly hero. This is my way of bringing the love for Sicily to Berlin not only with the food, but also with pieces of my own life”.

Everybody has its path: I decided to narrate mine through cooking

“Some years ago I would have never imagined that: Berlin, catering, the launch of Sicilian products branded with the Orlando logo. I studied communication and marketing and lived in Milan for many years but felt, at some point, that something was missing. I felt the urge of changing, of expanding my path. Cooking has always been intriguing for me: I had a good teacher at home. I, for sure, inherited this passion from my mother: I always looked at her cooking since I was a child. I always treasured the secrets of her lust. In Sicily, as in the rest of the world, cooking is an act of love. It is a moment of nourishment, together with the joy of sharing.”
“Back in 2013 I bought a one way ticket to Berlin and decided, together with Maurizio, a dear friend and fantastic music producer, to launch Orlando. Mine is the best job in the world because, when I cook, I feel peaceful. When I arrived in Berlin I dedicated myself to street food events, in order to get to know the german public. I used to rent kitchens and cook Sicilian specialities, which I still do sometimes, but I wanted something more stable and private, something I could have called home. On february the 25th, 2017, Orlando has finally opened to the public in Berlin, and the future is going to be tasty!

Open from Tuesday to Saturday from 5 PM to 11 PM