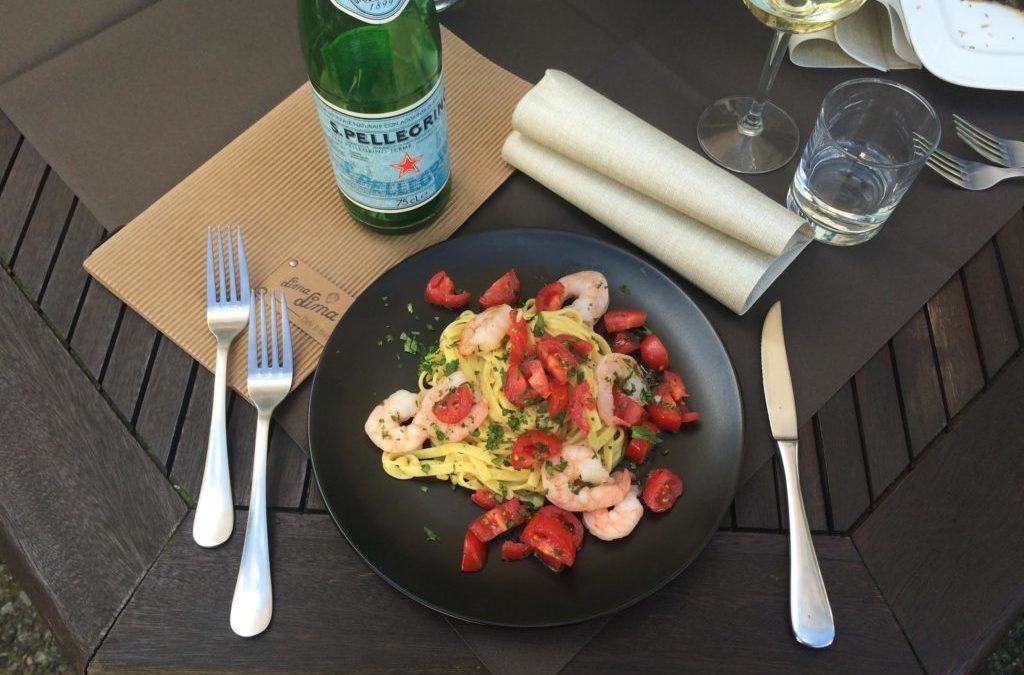 A kind of paradise for those who want to try Neapolitan delicacies: paccheri, ravioli, linguine, aubergine parmigiana…

Aubergine Parmigiana, ravioli seasoned with ricotta, thyme and lemon, savory pies with vegetables, paccheri seasoned with genovese sauce (typical Italian sauce made with onions and meat-slices), spaghetti seasoned with marinara – puttanesca – or amatriciana sauces, fusilli with sausages ragoût, linguine seasoned with octopus sauce, spaghetti with clams and fish eggs. These are only the starters, but let’s continue. There are also Neapolitan sausages with “friarielli” (a kind of vegetables), saltimbocca of the Sorrentine Peninsula, escalope and creamed salted codfish. No, that’s not all. You can eat rice balls (that are a little bit different from the Sicilian arancini), caprese cake, tiramisù made with amaretto biscuits, limoncello (a liqueur made with Sorrento lemons), nocillo…

In short: your mouths will be sure watering in front of these delicacies. Lima lima is a real paradise of the Neapolitan cuisine in Berlin. It was opened on the 21st of December 2015 in Schlüterstrasse 74, in Charlottenburg district and from that moment there has never been an Italian that, hearing about it, didn’t want to try its food.

The creators. «Welcome to Daniela and Rosario» is what you will read entering in this restaurant. He is Neapolitan and she is German, from Neuburg. The first time they met was in 1987 in the Italian island of Sardinia. At that time Daniela was 19 and she just moved there with her parents because of her father’s work. «I wasn’t able to speak Italian, but it didn’t take long to learn it. I started dreaming and thinking in Italian.» At that time Rosario was working as a chef in a restaurant based in Cagliari and called “Lima Lima”. As you can imagine, he took inspiration from there for the name of his own restaurant. «We decided to come to Berlin because we thought that it was a “global” city. Our impression was confirmed» Daniela tells us.

The name. «Everyone thinks that this name is linked to Perù, but this is not true. Our place is called in this way because of Rosario’s passion for the sea and, most of all, for shells. In fact, Lima Lima is the name of a shell.» Lima Lima was opened the last December. «At the beginning it was a little bit difficult to deal with the German bureaucracy, but now I can say that I was lucky because I have always found kind people that were ready to help me» Daniela says.

Only Italian products. «People notice the difference between our products and the others. For example: we buy Neapolitan coffee – and we pay an high price for it. We may as well buy another type of coffee; but when a client admits that our coffee has a particular taste, we are very proud of our choice.» But this is only one example. Lima Lima leans on Italian manufacturers for all its products: starting from the pasta (“De Cecco”), the tomato passata (“Mutti”), “San Pellegrino” water, cheeses and to cold cuts. If you went there, you will definitely notice the difference.

Open Monday to Saturday, from 12 to 10 pm. Closed on Sundays.