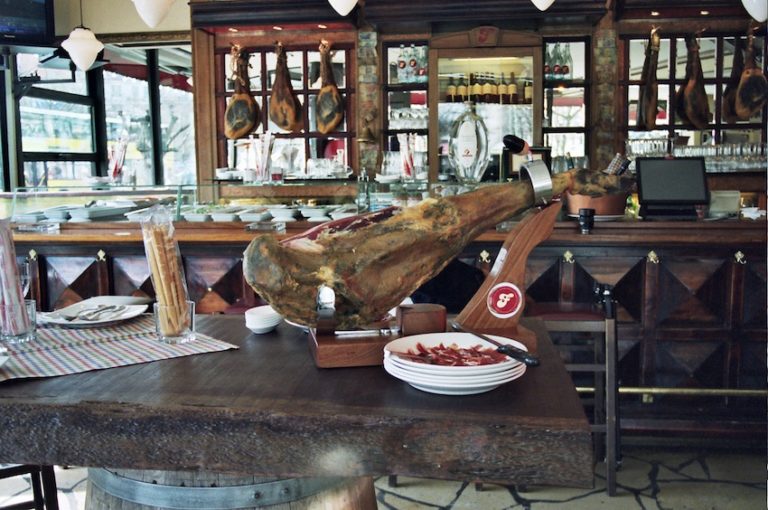 Francucci is the only Italian restaurant in Berlin that serves the real Chianina steak and other amazing specialities, including fish dishes and pizzas.

Francucci, the only Italian restaurant serving the original “Chianina” steak in Berlin

“The first time we brought the Chianina (an Italian breed of cattle) from Italy here at Francucci was in 2003. At the time nobody had never served it before and even in Italy it was not so well-known. You had no possibility of contacting directly the breeder, the only way was contacting a specific association that would have wanted to know how you would have cut, blended and served the meat. That’s why I had a telephone interview with one of their selectors and after our talk he called the restaurant saying that he wanted to talk with our chefs. The first “Chianina” order was successful. After a few months, that selector, Paolo Vagnini, came to Berlin just to make sure of our work. Since then we have made every order of Chianina with him. I went to Emilia-Romagna, Umbria and Abruzzo to make sure that the cattle lived freely in the wild. Today it’s important to eat little and quality meat coming from healthy cattle; we make everything with that meat: we make ragu (Italian meat sauce) for pappardelle (wide strips of pasta),carpaccio (raw meat), stew and of course steak and rib-eye steak.

Read the article in Italian in German.

The price is very high: more than 30€ per Kg so that every order amounts to at least 80€. It took a long time to make clients understand what the Chianina really is in terms of price performance; it was an investment in quality with very low profit margins, almost no income if we refer to a short period. At the beginning we hoped that other Italian restaurant owners shared the order but only a few of them were interested in.

Today people come here from Hamburg and Hannover expressly to taste it; anyway the Chianina is not the only meat we have, we also serve the “Avileña-Negra ibérica” (a Spanish breed of cattle), that is one of the most exquisite meats in Europe and sometimes we try other types of meat normally having a dinner with experts and friends.

I think it is important to make people aware of what they are eating; oxes and cows were considered holy animals among many people in the past; they give us milk, meat, work and fields fertility. Sometimes we forget to respect these animals as they deserve.

Listening to Franco Francucci, owner of the namesake restaurant located in Kurfürstendamm 90 near Charlottenburg in Berlin, means getting totally absorbed into an amazing story made of culinary advice, anecdotes on yesterday’s and today’s Italian food service industry in Berlin. He is the namesake restaurateur’s son who in the early ‘60s moved from the small hamlet Casaline di L’Aquila to Germany. He initially moved to Göppingen (Baden-Württemberg) and then to Berlin where he opened a legendary fraschetteria (a typical Italian tavern) named La Grotta, a hot spot for the Italian gastronomy in Berlin as well as the Ciao Ciao inaugurated in 1968 and then closed in 2007. In 1996 his son Franco, after having attended a catering institute, opened his own restaurant; its name is “Francucci’s” and it is definitely one of the best Italian restaurants in Berlin.

At the beginning of the article we have only written about the meat that the restaurant serves just because since we’ve tasted it we can’t stop thinking of it, but even if we draw the attention to the rest of the menu, in particular to pizza, focaccia and pasta (the restaurant serves both egg-noodles and durum wheat pasta) excellence remains a certainty. On rotation are also available prawns, mazzancolle (a type of shrimps), clams, porchetta d’Ariccia (a savoury, fatty, and moist boneless pork roast of Italian culinary tradition) and Buffalo mozzarella from Campania (a type of Italian mozzarella).

“We have a professional pasta maker, an appropriate fridge for meat’s aging and a special oven to make pizza. I love pizza, I prefer the roman pizza instead of the Neapolitan one, but in general ingredients quality is the most important thing and most of all no more than three condiments together. You can just take a look at the menu and your appetite will be instantly worked up. It can be in summer on the terrace or in winter in a comfortable and large room inside the restaurant, at lunch (from 12:00 am) or at dinner (until midnight), a meal at Francucci will always be unforgettable.

According to Franco, cooking the Chianina is a real science: “first of all you have to store it at room temperature for three hours; then put it on the grill with no condiments at a high temperature so that the Maillard reaction can happen and the crust caramelises. Depending on the meat’s cut thickness, leave it there for 4 or 5 minutes; the internal temperature should reach 63° circa. At this point put the steak in the oven at 70°/80° for 10 minutes. Then add salt, pepper and oil and put the meat on the pan for a while so that it can be served boiling.”

Yesterday’s and Today’s Italian food service. “There was a time when the Italian community was small and united. I grew up spending a lot of time in my father’s restaurant, listening to all those Italian people, mostly restaurateurs, who told each other their day’s work enjoying a glass of wine and a tasty appetizer of the restaurant. There were restaurateurs who were determined to safeguard Italian local specialities and Italian products in general.

The recent migration of young Italian graduates, who have come here with the purpose of becoming restaurateurs, makes me feel like going out to try out new Italian restaurants. I’m in this industry since I was very young so I can say that the secret – If it exists at all – is aiming to food quality, having a certain relationship with the client, reinventing yourself everyday and investing in difficult times. I love my restaurant, I love the idea of sharing a dinner there with my father who is 79, my sons who are respectively 13, 19 and 21 maybe supporting Italy in a match all together. I think there is always a good atmosphere here.

Thanks to “Francucci” I’m getting many satisfactions, especially when clients start trusting us and decide to try local specialties on the menu, often forgotten. I think it’s good to promote the whole Italian culture, not only that of wine and food; that’s my way of promoting Italy in Germany and I’m proud of it.”